Talk about a crappy week!  Let's re-group, shall we.
I live in New Jersey, right outside of Philadelphia, PA.  The whole "Jersey Shore" thing is a bunch of crap, yes I know what grass looks like, and no, my family is not part of the mob (not that I know of, LOL!).  I live NO WHERE near a fault line, so explain to me how in the hell we got hit with an earthquake?!  I was sitting in my basement, watching TV (yes, I like Maury!), when I hear what I think are footsteps in my kitchen.  Albeit, my cat is a bit chubby but these were footsteps.  I started to panic.  Ya see, back in February, my neighbor walked in on a burglary in progress in his house, so I was a bit freaked out.  I started yelling and then full blown panic set in when I thought the footsteps went up the second story steps.  I grab the phone, call 911, and tell the dispatcher that someone is in my house and to hurry!  I run outside as directed and see my entire neighborhood outside.  Pretty strange for 2pm on a Tuesday afternoon in August.  They are pointing to my backyard, so I think the robber is running away, the poor dispatcher is trying to calm me down when I have my moment of clarity and hear,"OMG it's an earthquake!"  Huh?!  I tell the 911 guy to forget it, he has to send the police out anyway.  Two police cars pull up, they realize that this isn't the first call they're gonna get like this today.  Thank goodness I knew the cops, I live in the same town I grew up in and 90% of the cops I went to school with (that would of be handy when I was in high school!).  So an earthquake in NJ.  Freaky but interesting.

Shall we continue.......
Let's move onto the end of that week.  Hurricane Irene is heading up the east coast.  I live about 50-60 miles from the Jersey coast.  I can make it to beautiful, white sand beaches (LBI baby!) in under and hour and to the beautiful Pocono Mountains of PA in about 3 hours.  Hurricanes are not something we have alot of here.  Yes, it rains hard, we get winds and even hail at times but hurricanes, not really.  This was definitely front page news here.  The TV and newspaper and Internet had us all doomed.  Kinda scary I must say.  So I stocked up on the essentials, bottled water, chocolate, chips and cereal.  Hey, we gotta survive!  We hunkered down on Saturday and made preparations.  I lifted everything off the craft room floor, we secured porch furniture and all trash cans.  Well, that biotch Irene decided to hang out and take her sweet ol' time getting outta here.  It rained liked hell, and the winds whipped, but we suffered no major damage.  My craft room flooded :(  .  But in the grand scheme of things we were lucky, we never lost power and we still have a roof over our heads.  However just when Irene began to start churning, I began to feel like hell.
Stuffy, achy, fever, the whole thing. REALLY?! Come on! I think that the pressure from the storm is now in my head and ears. There is nothing the doctor can do, and I just wanna pop my ear drums and vacuum out my sinuses! This week has got to end soon! Here's a few pictures of the river down the street from us: 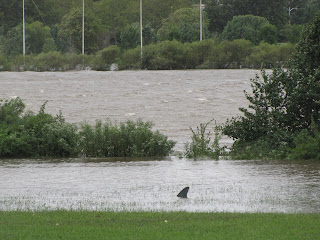 That fin is actually a "sculpture", there's about 5 of them.  Don't ask. 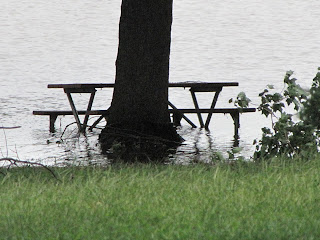 This picnic table is about 50-75 yards from the actual river. 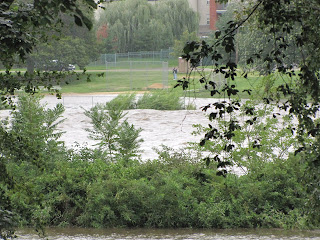 That little patch  of grass is supposed to be about 25 yards away from the river's edge. 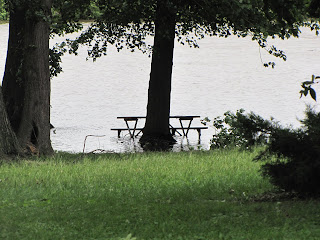 So when you are having a bad day, stop for a minute and think just how crappy my week was!
Wanna trade? :)
Posted by Lisa at 10:26 AM
Email ThisBlogThis!Share to TwitterShare to FacebookShare to Pinterest