Well it's sure has been awhile! School started, Halloween has come and gone and now Thanksgiving is but a mere memory. I feel like I've been away for a million years! It's been an interesting and somewhat sad autumn in my household. The kids and the hubs are great, I however, have been diagnosed with diabetes, which let me just say SUCKS! It really is overwhelming, and so much to learn. Everyone has been kind offering advice, cut out all candy, don't eat bread, go on Atkins! There's more to it than that. It's been a learning process for sure, but hopefully I can figure it all out. My wonderful Dad was diagnosed with lung cancer. CANCER SUCKS! He is a former smoker, and had no real symptoms, other than the tumble he took at my niece's field hockey game. He fell asleep and just sort of rolled down onto the grass, he hurt his arm and when he went for xrays they saw "something". Turns out to be cancer, tomorrow is the broncoscopy, let hope the news gets better.

Well that was all the depression I can deal with for now! I started to crochet! AHHHH another craft! My poor husband is gonna kill me! It's fun though! I learned via DVD just like I learned to knit. Made my first blanket, thank you very much! Gave it to a friend's new grandson. 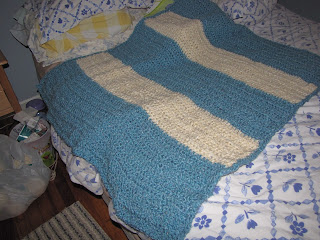 My house is deocrated, the tree is up, and I am done shopping so yeah me! Now I just have to wrap!
Posted by Lisa at 11:44 PM
Email ThisBlogThis!Share to TwitterShare to FacebookShare to Pinterest